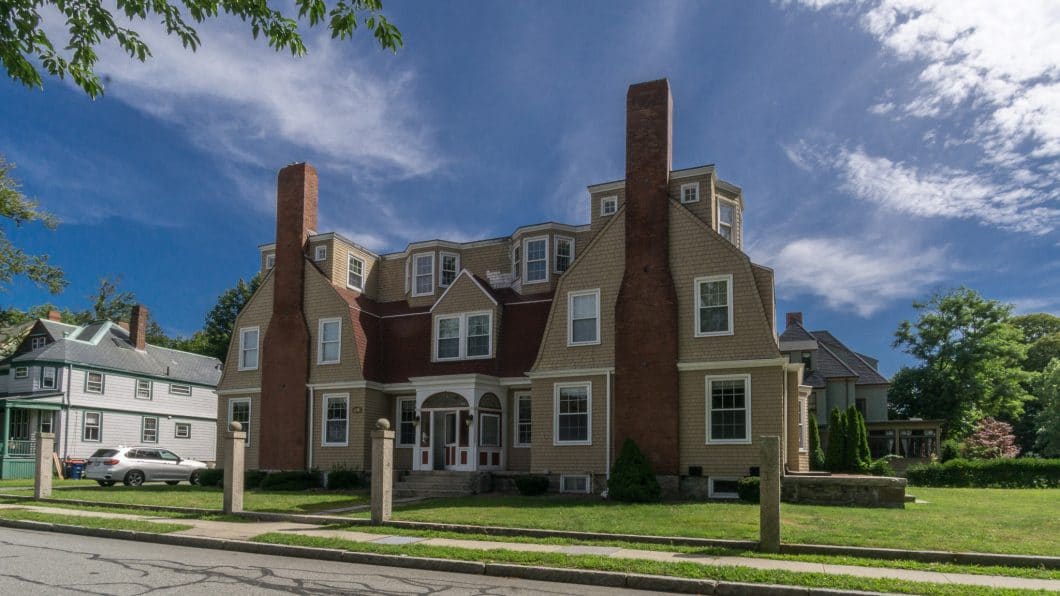 52 Ash St. New Bedford, MA., at 8,497 square feet of living area, is the largest single family home in the city, by far. For comparison, the 2nd largest home in the City is situated on Hawthorn St and has 6,552 square feet.
This majestic home sits on just shy of a 1/2 acre of land, and makes it’s presence known with approximately 173 ft of frontage at the intersections of Ash Street and Moreland Terrace.
Built for William D. Howland in 1884 to resemble the letter “H”.
The home has an enormous front foyer with dark wood and floors, which likely held many great balls. The landing on the 2nd level is said to have held a live orchestra during their parties and the 3rd level was used for Dr. Prescott’s medical practice.
Curious fact: Historically it’s known as the “Dr. Charles D. Prescott House”. Why not the William D. Howland House?
The home was entered into the National Registry sometime in 1976. It’s noted to be in the County Street Historic District. According to their data, the architect was George H. Ingraham, and builder Charles E. Pierce.
This home later became the Red Cross Headquarters sometime in 1941.


Warning: count(): Parameter must be an array or an object that implements Countable in /home/customer/www/silvarealtygroup.info/public_html/wp-content/plugins/wp-listings/includes/helpers.php on line 196

Warning: array_slice() expects parameter 1 to be array, string given in /home/customer/www/silvarealtygroup.info/public_html/wp-content/plugins/wp-listings/includes/helpers.php on line 197

Warning: Invalid argument supplied for foreach() in /home/customer/www/silvarealtygroup.info/public_html/wp-content/plugins/wp-listings/includes/listing-templates/single-listing-solid.php on line 1121

← Back to main site