On this 1875 Map, we see that there’s not much going on here. Bay Street wasn’t even on the map yet. George Howland owned the land at 42 Bay St up to 1884 when the house was built. There’s a lot of reference to both #4 Bay St and #14 Bay St with one of the past inhabitants, so our guess is this may have possibly been part of a larger estate.

PS. Did you know #14 Bay St. belonged to Captain Anthony of the Catalpa expedition? That may just be another home story for another day.

He arrived some time around 1873 and married Anna (Annie) Winter in 1882. He purchased 42 Bay St from George Howland and lived in the farmhouse from 1885-1895 when they moved to Rockland St. in Dartmouth according to the U.S. Federal Census.

(The woodhouse family and their descendents owned/operated The “Woodhouse Shop” in Padanaram/Dartmouth for decades.) 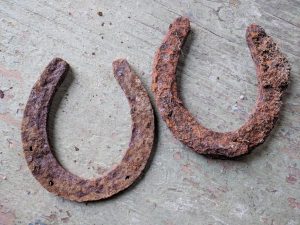 We found many old horseshoes in the dirt basement under the barn.

I wonder if they belonged to Woodhouses’ horses!

Orton S. Simpson was born in Sandwich, MA around 1854. He was a band leader/instructor with the Westport Brass Band.  He married Sarah A. Feavyour around 1879.

He worked as a glass inspector at the Glass Works and their son Percy Bertram Simpson was a silversmith.

Edgar Wright resigned from a position as a boss carder for Aldrich Mfg and came to New Bedford to partner up with Harrison T. Borden, and they dealt in coal, wood & real estate. Mr. Borden invested in many south end parcels.

His son Harry Edgar Wright was an Optician. He is shown below.

I’m super curious if that vehicle was ever parked in the garage! This photo was taken after they had already moved out, but we found several very old license plates buried in the dirt basement under the barn. 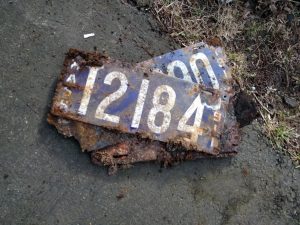 Mrs. Wright was a Sunday School Teacher along with the previous owner, Mrs. O.S Simpson!

Thomas was born in 1886 in Taunton. He was a painter for the City of New Bedford. (Rudish & Hartigan Construction). His wife Anna was from Ireland.

Our story ends here, as we want to respect the privacy of past inhabitants/owners that are still living.


Related Posts
Old Home Stories
Researching the History of a House
What's your Historic Home Worth?
Search by Style

A New Historic Home Hits the Market... We Send You An Alert. 🔔

Searching homes on your own can be fun…  until it’s not.

In today’s real estate market, Houses are listed
and then gone before you know it!

That can lead you to obsessively scour several real estate websites, numerous times a day, looking for new listings that have hit the market!

We know your time is valuable. We’ll do the work for you.
Get a property alert when a new historic home hits the market.

That’s it. Simple. Get Started Today by entering your Name & Email Below.

Don’t forget to let us know which areas you’re looking in.
Looking everywhere in MA & RI? That’s fine too.